Back in the quaint days of late 2017, the world was awoke by a batch of bids of momentous size – and shockingly low pricing – in a solicitation by Xcel Energy. In fact, the median bid on 16 GW of solar+storage came in at only 3.6¢ per kilowatt-hour (kWh). This price was only 0.65¢/kWh more than the 30 GW of solar-only bids.

For perspective’s purpose, according to the EIA in 2016 either operations or maintenance for ‘fossil steam’ electricity sources were above 5¢/kWh for existing facilities across the USA. This is before fuel costs estimated at an average of 2.5¢/kWh.

Yesterday saw the close of another public step in this proposal process. And while we no longer have 30 GW of solar power to salivate over, there are serious volumes being proposed to go in service by 2023.

The individual solar power project range in capacity from 72 to 250 MW. The individual energy storage projects range from 50 to 125 MW, with two and four-hour ratings. The total solar to be deployed under this plan would be 707 MW-AC, with 275 WM/1,000 MWh of energy storage.

The Preferred CEPP notes that it is accelerating some solar power deployment to take advantage of the federal Investment Tax Credit. Xcel Energy projects that taking advantage of the timing would save customers $20 million, and close 380 MW of coal (Commanche I & II) up to 10 years early. The utility said the opportunity offered ‘unprecedented pricing.’

The solar power bids ranged from 2.3-2.7¢/kWh, while solar plus storage ranged from 3.0-3.2¢/kWh. While it makes for an imperfect comparison as solar project costs vary, the solar vs solar+storage delta is 0.5-0.8¢/kWh.

Even more eye popping was the wind power pricing that ranged from 1.1-1.8¢/kWh.

The documented referenced the Section 201 tariffs, and that it needed to get all solar power bids resubmitted due to the increased pricing of solar panels. However, this does not mean that project prices necessarily increased. As noted by the utility:

If any of these large solar+storage projects are NextEra owned, we could see DC:AC ratios up to 1.65, meaning the DC size of these projects is probably between 919 MW-DC to 1,166 MW-DC.

If the Preferred CEPP plan is implemented, it would see the utility move from 28% renewables as of 2017, to 53% by 2026. The most important piece of all of this are deep emissions reductions. By 2026 generation serving Xcel’s Colorado customers would emit nearly 60% less CO2 and 90% less SO2 and NOX, compared to 2005 levels.

And this is coming at a bargain for these customers. When these bids came out back in January, CarbonTrack.org noted that at 3.6¢/kWh for solar+storage 74% of coal would be would priced higher. With the new pricing of the solar+storage turning out to be 3.0-3.2¢/kWh – 100% of coal powered generation is now more expensive. 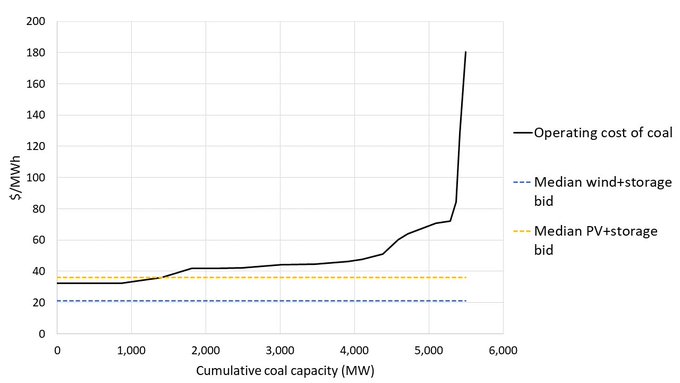 Back in 2015 Jim Robo, the CEO of NextEra Energy, said, “Post-2020, there may never be another peaker built in the United States — very likely you’ll be just be building energy storage instead.”