EPFL’s SolAce pilot unit was inaugurated today at the NEST R&D center on the Empa campus in Dübendorf, Switzerland. Researchers at this solar-powered unit will test out new technology designed to make buildings energy positive and carbon neutral – while providing maximum comfort for their occupants.

SolAce – which opened its doors today at the NEST building in Dübendorf – is a pilot unit where researchers will test new technology for sustainable living and optimal user comfort. The building will generate more power than it uses (for heating and electricity) and will be carbon neutral or even carbon negative. Intended to be a combined working-living space, it has a bedroom with two separate beds, a kitchen and a living room. “By reducing the amount of commuter traffic from people going to and from work, we can make a substantial cut in carbon emissions. Two researchers will live and work at SolAce for two years to try out our idea of a dual-purpose building,” says Jean-Louis Scartezzini, head of EPFL’s Solar Energy and Building Physics Laboratory (LESO-PB) and the SolAce project leader. 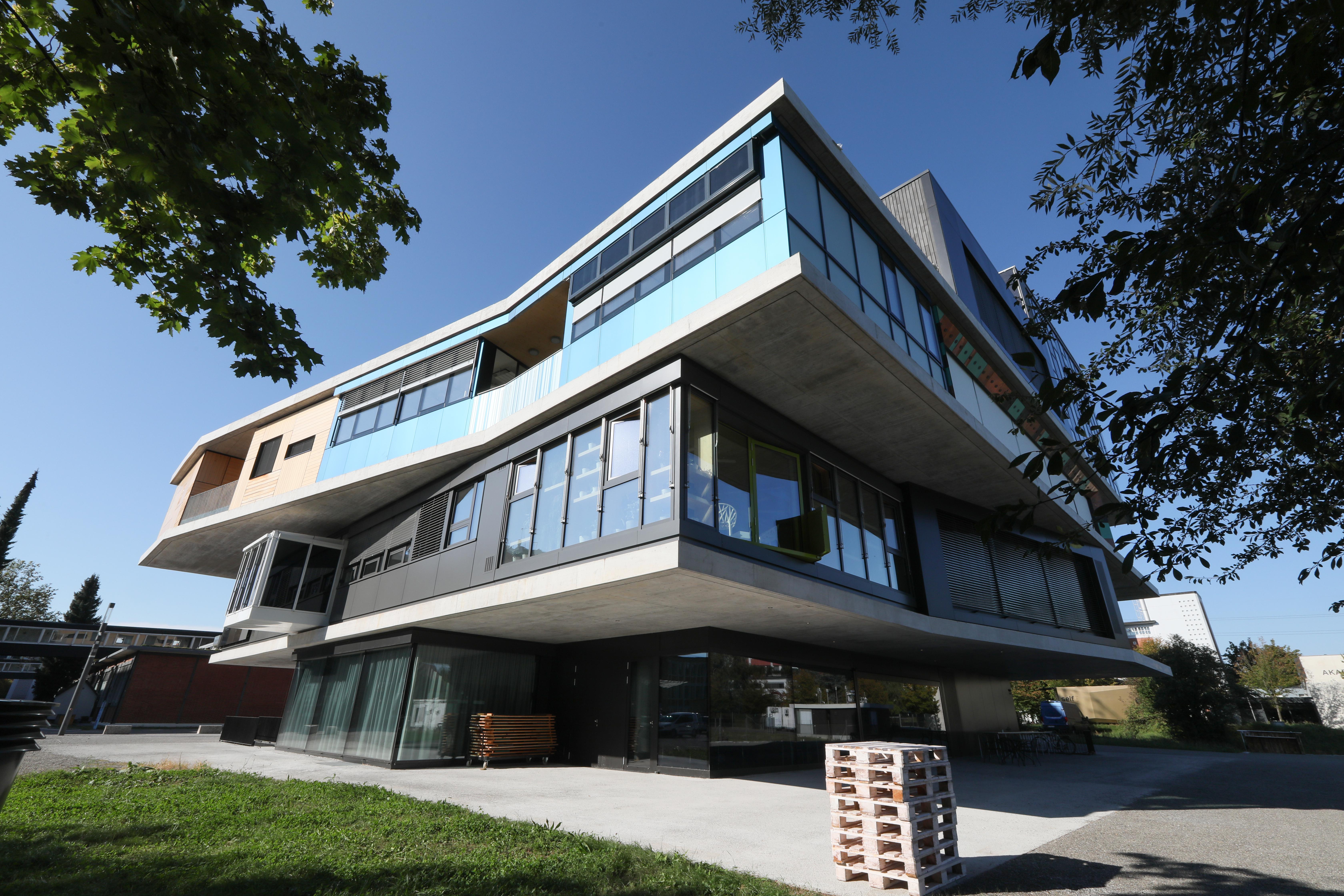 SolAce is the fifth pilot unit to open at NEST, which is a modular building where researchers work with construction-industry businesses on joint R&D projects through an initiative spearheaded by Swiss federal research institutes Empa and eawag. The building consists of a central tower or ‘backbone’ surrounded by three open platforms where pilot units equipped with the latest sustainable-living technology can be installed on a plug-and-play basis. Units already at the building include Urban Mining, which is built entirely from recycled materials, and Vision Wood, which is exploring revolutionary new ways of using wood. SolAce joins them as a 100 m² apartment-laboratory where LESO-PB researchers can test out sensors and other technology they have developed under real-world conditions.

A façade that doubles as a solar power plant

The unit’s façade is designed to be energy positive all year long. It’s covered with a special colored glazing for photovoltaic (PV) sensors and thermal collectors. “Because the nano-coating is highly transparent, it allows for minimal absorption and very little energy loss,” says Andreas Schüler, head of the Nanotechnology for Solar Energy Conversion research group at LESO-PB. This technology was developed and patented at EPFL and is currently being marketed by EPFL spin-off SwissINSO. The large surplus in solar power that SolAce generates will be stored in NEST’s Energy Hub so that anyone at the building can use it, including researchers at other pilot units. 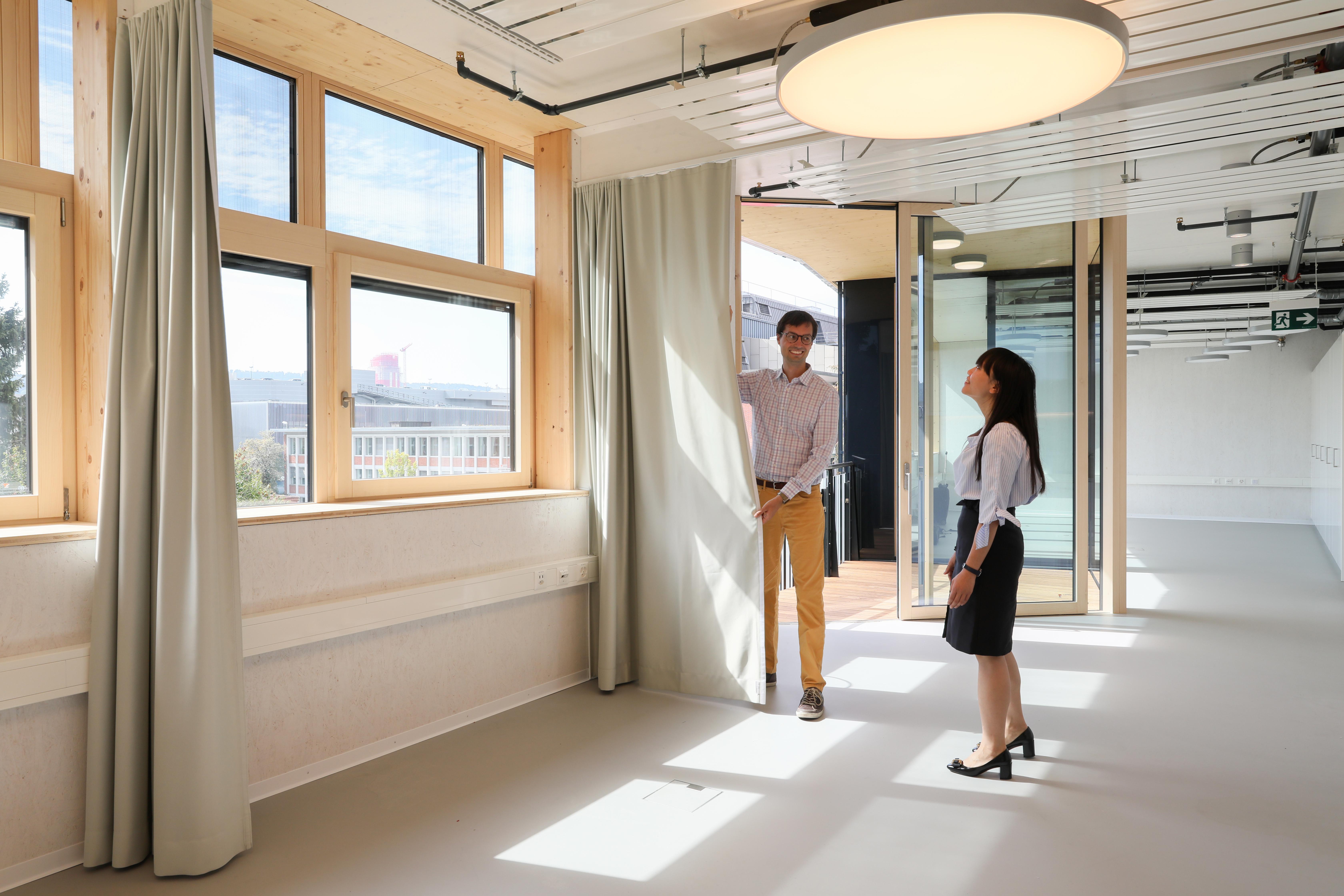 SolAce’s special triple-glazed windows have a selective coating that lets mobile-phone waves pass through. Their glazing also contains 3D microstructures that can redirect light to darker areas of the unit. These ‘micro mirrors’ are invisible to the naked eye; in the winter, they can reflect light up to the ceiling to create more uniform interior lighting and help distribute solar heat. In the summer, they can bounce sunlight back outside the unit to prevent it from getting uncomfortably hot.

Cameras that imitate the human eye

As another comfort-enhancing feature, the LESO-PB researchers have installed mini cameras that respond to light in the same way as the human eye. These prototype sensors continually measure the amount of lighting and glare that a building occupant experiences, and software linked to the sensors instantly adjusts the unit’s blinds and electric lighting accordingly – while taking into account the occupants’ circadian rhythms. “We plan to carry out further research to make interior lighting even more comfortable and distribute light exactly when and where it’s needed, in order to match users’ circadian rhythms. We hope our technology can help naturally enhance the productivity of people working in an office,” says Ali Motamed, a post-doc researcher at LESO-PB.