France is a country that bases the security of its supply on nuclear production. Just wanting to halve the share of nuclear production in the electricity mix is already a major challenge that will test the country’s energy transition plans.

Germany and France are the two main electricity markets in central Europe. Both are large markets that export electricity to their neighbors and usually set the lowest prices in the markets of the central-west area of the continent.

But Germany and France have very different energy mixes. While Germany has a lot of renewable production and covers its thermal gap mainly with coal, France generates three-quarters of its electricity from nuclear.

The price of French electricity wholesale market EPEX SPOT in recent years has followed the trend of the rest of Europe. Last year, the average market price was €50.20/MWh – a rise of 12% from 2017 and an accumulative increase of 37% since 2016. According to AleaSoft, the upward price trend in the French market shares its causes with the rest of Europe – the rise in thermal generation costs due to the increase in the price of gas and coal and of CO2 emissions rights. Since 2016, the price of European Emission Allowances (EUA) CO2 emission rights has multiplied by five, and between 2017 and 2018, the price of API 2 coal increased by 10%, and that of TTF gas by 32%. 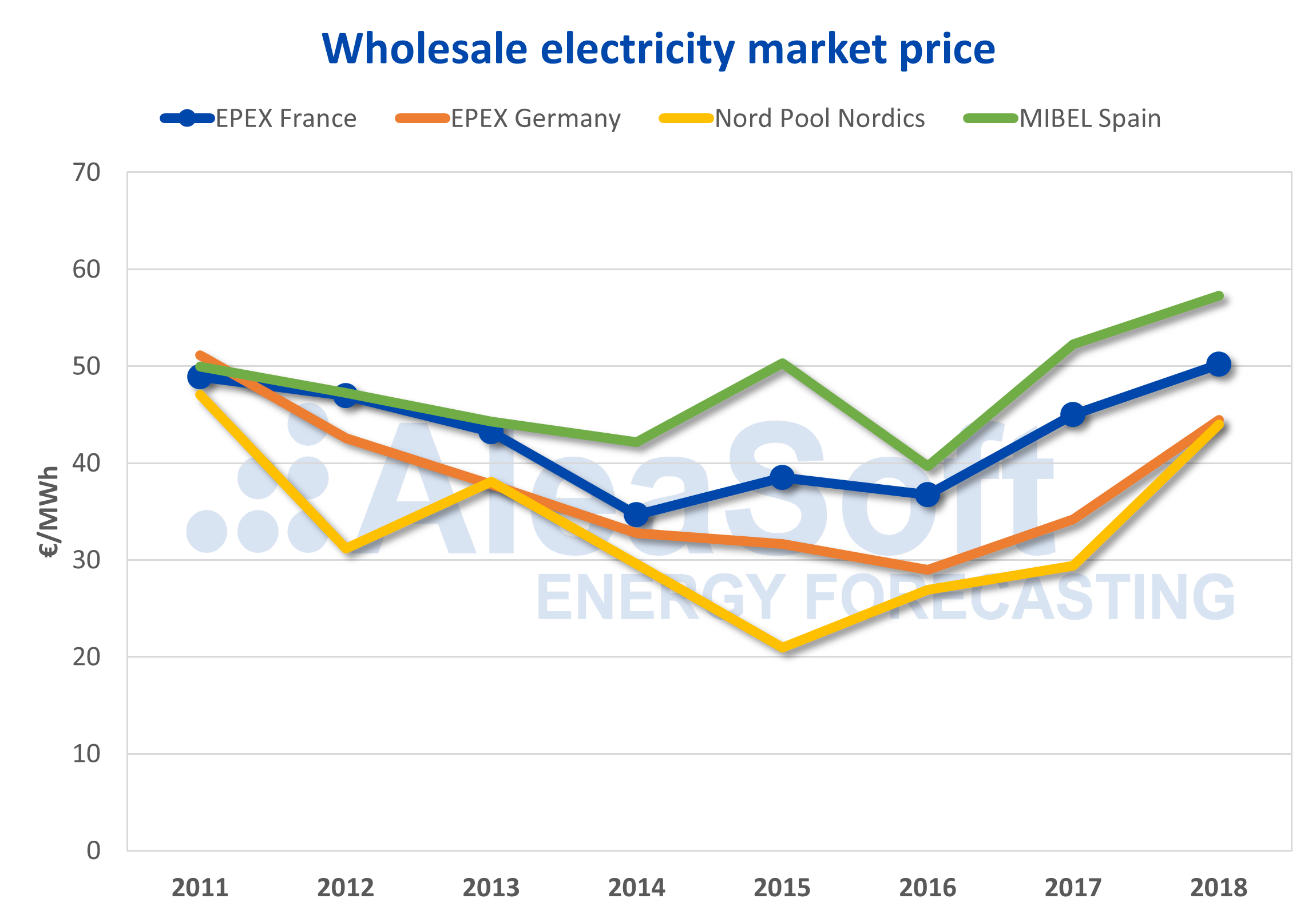 The price of the electricity market in France has been characterized by suffering several nuclear crises in recent winters that have put security of supply at risk and seen electricity prices skyrocket. Security problems in French reactors caused the shutdown of half the nuclear parks, coinciding with cold snaps and electricity demand peaks. The most serious crisis occurred in January 2017 when the system’s stability was jeopardized and a risk of blackouts was present. Hourly prices went above €200/MWh and dragged half of Europe with them. In the Iberian market, MIBEL prices exceeded €100.

The maximum historical prices of French electricity have been even more severe. On October 19, 2009, the price reached €3,000/MWh, for several hours. On June 16, 2013, for three consecutive hours, the price recorded was €‑200/MWh. France has traditionally been the most volatile market in Europe. AleaSoft says that is because extensive nuclear production leaves a small thermal gap, meaning slight variations in its composition can bring large fluctuations in the marginal price. The thermal gap in France is, on average, less than 10% of total production – in Spain it is around 30%, in Germany 50%.

France is a large exporter of electricity. In 2018 the balance of international exchanges of France was in the exporting direction, with all neighboring markets. The French exported 68,408 GWh and imported 8,529 GWh for a net balance of 59,878 GWh exported. The market with the most electricity exchanged with France – in both directions – was Spain, with 2,984 GWh imported and 14,963 GWh exported for a balance of almost 12,000 GWh exported to the Iberian peninsula. 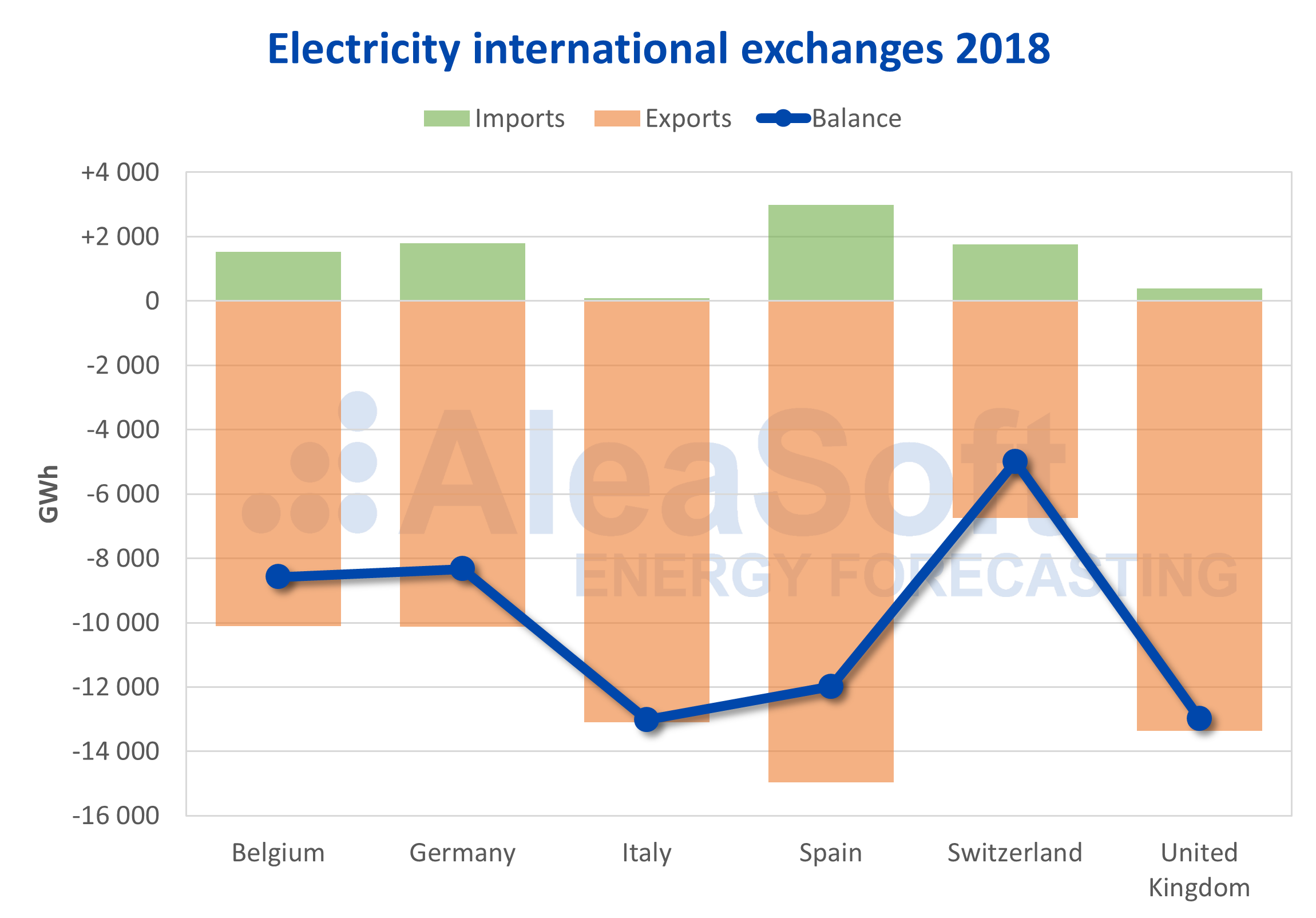 Those numbers place France as the second largest exporter of electricity in Western Europe last year, just behind Germany.

The French production mix is peculiar as the country generates three-quarters of its electricity from nuclear, which meets more than 80% of demand. Nuclear generation in France is more flexible than in countries such as Spain and allows it to work in load-following mode. Since 2016, nuclear generation has had a share of close to 74% of the energy mix. Until 2015 the values were notably higher, with around 80% of total national production. The decrease in the share of nuclear has been covered by the gas combined cycles that gained prominence in recent years, and last year represented 5.6% of electricity production. 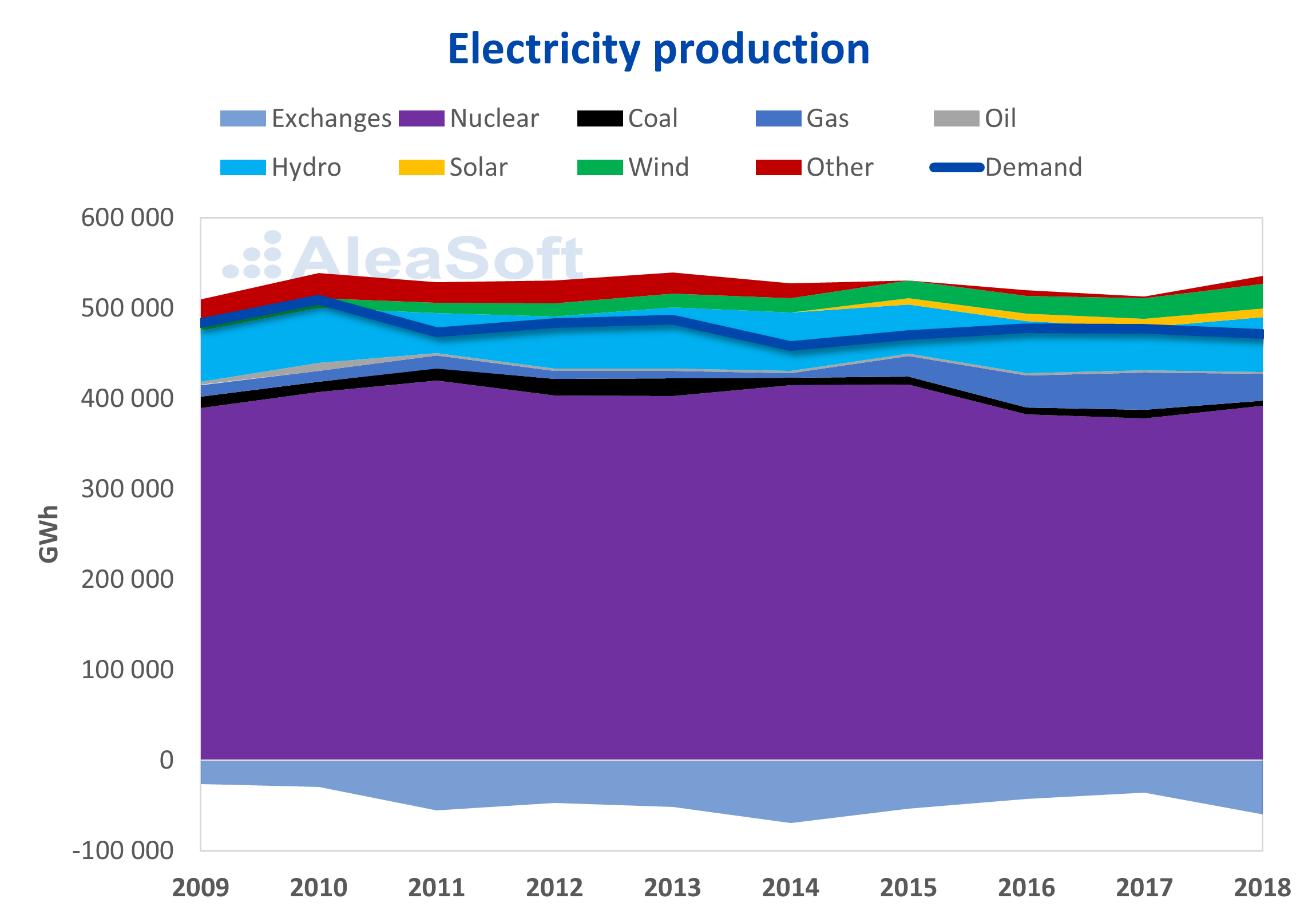 Sources: Prepared by AleaSoft using data from ENTSOE and RTE.

The rest of the production mix is made up of hydroelectric production, with just over 10%; wind, which last year reached 5%; and incipient solar that did not reach 2%. Production with other fossil fuels, coal and fuel oil, has been reduced considerably in recent years, as renewable wind and solar and gas production increased. Last year, production with coal had a share of 1.1% and production with fuel oil 0.4%.

Electricity demand fell 1.2% last year and has followed a clear downward trend during the last decade. Since a peak of 509 TWh registered in 2010, demand has fallen 7.5%.

Electricity generation is dominated by 58 nuclear reactors with 63,130 MW of capacity – 48% of the France’s installed capacity. Nuclear is followed by hydroelectric, with 17% of capacity; wind (10%); gas plants (9.1%); and solar (6.3%). Renewable power in France makes up 37% of total capacity, and low-carbon technologies 85%.

The energy revolutions under way in Spain and Germany have thus far been absent in France because of its heavy dependence on nuclear and the technology’s classification as a low-carbon power source.

The challenge the French energy transition is facing is enormous. Replacing base load production, such as nuclear, with intermittent renewables is complicated not least by the need to avoid a rise in CO2 and other greenhouse gas emissions from any thermal back-up production. The French government plans to reduce nuclear to a half share of the energy mix in 2035, which would mean shutting down 14 reactors but also commissioning the new Flamanville reactor.

Meanwhile, renewable production should increase from the current 20% to 40% by 2030. To achieve that goal, the government intends to increase hydroelectric power, wind – onshore and offshore – and solar. AleaSoft feels an increase in energy efficiency and reduction in demand are going to be indispensable for the success of the French energy transition.