Moreover, two big Russian corporations have unveiled plans to produce hydrogen and Portuguese utility EDP said it wants to set up a a pilot project for a green hydrogen plant in Brazil. 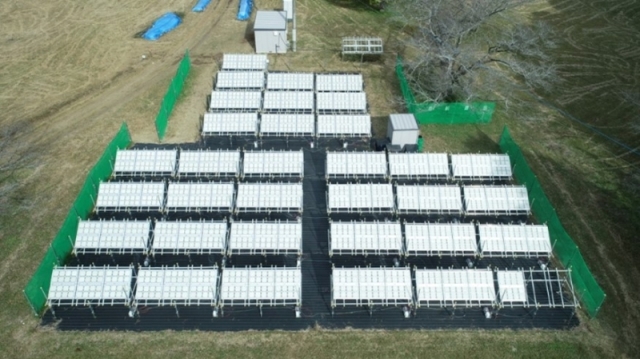 Japan’s New Energy and Industrial Technology Development Organization (NEDO) and the Artificial Photosynthesis Chemical Process Technology Research Association (ARPChem) are working together with the University of Tokyo, Fujifilm, Toto, Mitsubishi Chemical, Shinshu University, and Meiji University on the implementation of artificial photosynthesis systems. “Developed and demonstrated for the first time in the world: a photocatalyst panel reaction system that connects a two-scale photocatalytic photocatalyst water decomposition panel reactor and a hydrogen/oxygen gas separation module. The test was successful,” reads a statement released by NEDO last week. In August 2019, the partners started a demonstration test of a photocatalytic panel reaction system under natural sunlight outdoors and separated high-purity solar hydrogen from a mixed gas of hydrogen and oxygen generated by decomposing water. The results of the research were published last week in the online version of the scientific journal nature. “Extending our earlier demonstration of a 1 m2 panel reactor system based on a modified, aluminium-doped strontium titanate particulate photocatalyst, we here report safe operation of a 100 m2 array of panel reactors over several months with autonomous recovery of hydrogen from the moist gas product mixture using a commercial polyimide membrane,” the paper reads. “The system, optimized for safety and durability and remaining undamaged upon intentional ignition of recovered hydrogen, reaches a maximum STH of 0.76%.” The researchers said that hydrogen production is inefficient and energy negative overall, but that their findings demonstrate that safe, large-scale photocatalytic water splitting, gas collection and separation system are possible. “To make the technology economically viable and practically useful, essential next steps are reactor and process optimization to substantially reduce costs and improve solar-to-hydrogen (STH) efficiency, photocatalyst stability and gas separation efficiency,” they further explained.

Novatek, Russia's second-largest natural gas producer, signed a Strategic Cooperation Agreement on low-carbon projects with the Japan Bank for International Cooperation (JBIC). “The Parties intend to cooperate on projects to produce hydrogen and ammonia, carbon capture, utilization, and storage technologies, as well as renewable energy projects in Russia, including ammonia and hydrogen production projects in the Yamal Peninsula,” reads a note released on Thursday. Founded in 1994, Novatek entered the global LNG market in 2017 with its Yamal project. “We are actively studying options to further reduce our current low carbon footprint from Novtaek’s LNG production by using renewable energy sources, carbon capture and storage and hydrogen-based fuels at our LNG projects,” noted Novatek Chairman Leonid Mikhelson during the Eastern Economic Forum in Vladivostok. “This Strategic Cooperation Agreement provides opportunities for us to work with Japanese companies and financial institutions on developing our low-carbon solutions, attracting investments and expanding the range of suppliers of state-of-the-art equipment and technologies.” The energy sector played a significant role at the Forum. Japanese Industry Minister Hiroshi Kajiyama also signed an agreement with Russian Energy Minister Nikolai Shulginov to work together on hydrogen and ammonia production. “It is also hugely important that we make use of all the reserves that are available to us in this country,” Pavel Sorokin, Russia's deputy energy minister, commented on Thursday. Hydrogen is under the radar of the entire Russian energy sector.

Rusatom, a subsidiary of Russian state nuclear energy corporation Rosatom, is planning to launch its hydrogen cluster in the Sakhalin Region in the next years. “Our current plans include reaching a production volume of 30,000 tonnes of hydrogen per year by 2024,” said Anton Moskvin, Rusatom's overseas vice president for marketing and business development, during the forum, which aims to strengthen ties with China, Japan, South Korea and Vietnam.

The governor of the Brazilian state of Ceará, Camilo Santana, and the board of directors of EDP Brazil, a unit of Portuguese utility EDP,  announced a pilot project for a green hydrogen plant in the Port of Pecém, with a production capacity of 250 Nm3/h of gas. “Its operation should begin in December 2022, attracting a total investment of R$41.9 million,” reads a note released on Wednesday. According to the Ceará government, the project will be the first green hydrogen plant in the country. “Installed in the Pecém Industrial and Port Complex (CIPP), the plant will be the group's first, with 3 MW capacity and a state-of-the-art electrolyzer module for the production of fuel with guaranteed renewable origin,” said the government of the northeastern state located on the Atlantic coast. EDP CEO João Marques da Cruz added that the project was also aimed at the international market. The project will include research on the green hydrogen production chain and business models. For now, most of the projects announced in Brazil are scheduled to start operations in 2024/2025.

US construction machinery giant Caterpillar announced it would begin offering generator sets capable of operating on 100% hydrogen, including fully renewable green hydrogen, on a designed-to-order basis in late 2021. “More immediately, the company will launch commercially available power generation solutions that can be configured to operate on natural gas blended with up to 25% hydrogen,” reads the note released by the company on Wednesday. The world’s leading manufacturer of construction and mining equipment said that some of its gas turbine generator sets have run on high hydrogen blends for decades and are already capable of operating on 100% hydrogen.

The German Aerospace Centre (DLR) teamed up with Cologne-based engine manufacturer Deutz to develop new hydrogen-based solutions for off-highway vehicles. The parties inked the deal for equipment and agricultural machinery production last week. “The aim is to speed up progress in making hydrogen drives viable for the off-highway segment and we will be combining our expertise and R&D capabilities to achieve this,” commented Markus Müller, Deutz’s chief technology officer.